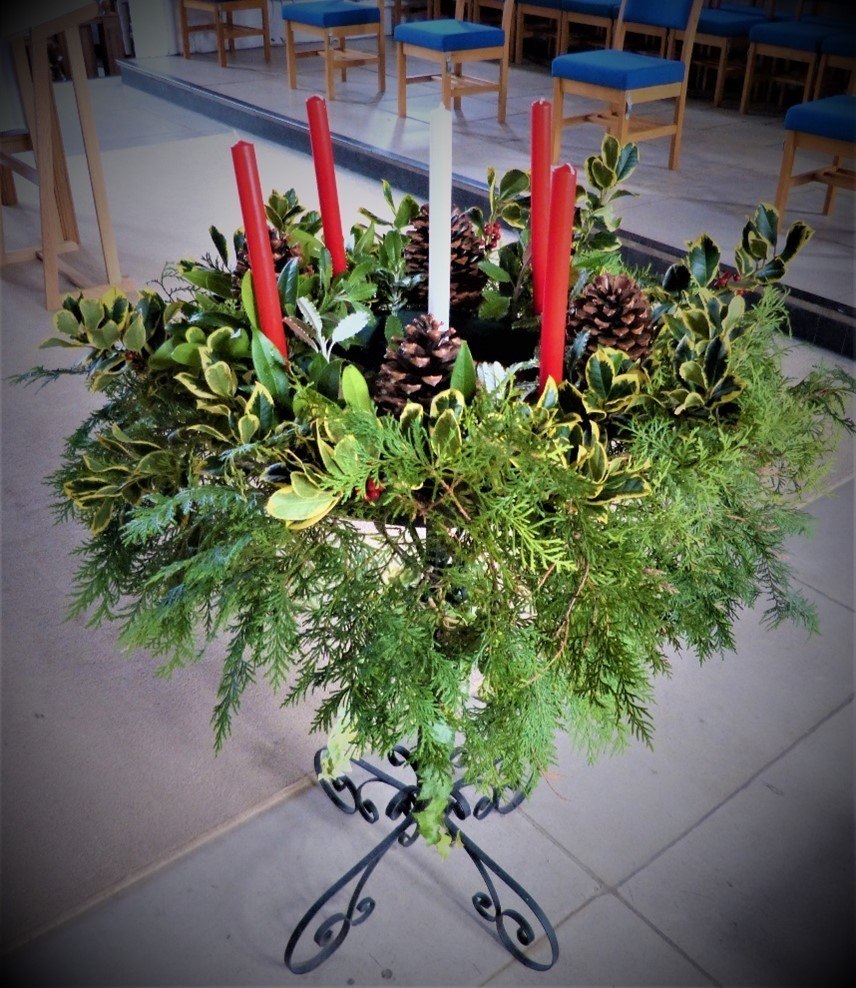 This is our Church Advent Ring.

Every Sunday in Advent an additional red candle is lit, representing:

Then on Christmas Day the centre white candle will be lit, representing Jesus, The Light of The World

The daily numbers on this calendar are made from lights to show the Light of Christ coming into the world.  Every day until Christmas Day there is a different picture, with an explanation.

Many homes set up a Crib or Nativity Scene for Christmas, adding the baby Jesus and the Shepherds on Christmas Day and the 3 Kings or Wise Men at Epiphany.  Some people collect figures from different countries around the world, and this Advent Calendar celebrates that.

Day 1: We start with St Francis. He is believed to have staged the first Nativity Scene live in 1223.  This figure of him comes from his hometown of Assisi. 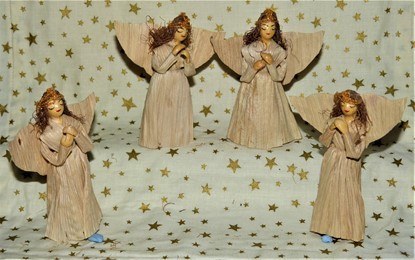 Day 2: Angels are God’s messengers.  It was the Angel Gabriel that was sent to tell Mary that she was to be the mother of Jesus.

These angels were hand made in Nepal 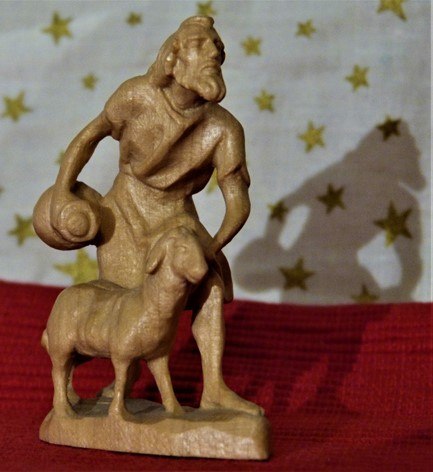 Day 3: The first people to be told of Jesus’ birth were shepherds, out in the fields with their sheep.  In Israel today the same field is a holy place.  They left their sheep in God’s care and went to find the baby.

This shepherd, with a gift of a sheep and a flask of cheap wine (water was not drinkable then), was made in a village in Austria. 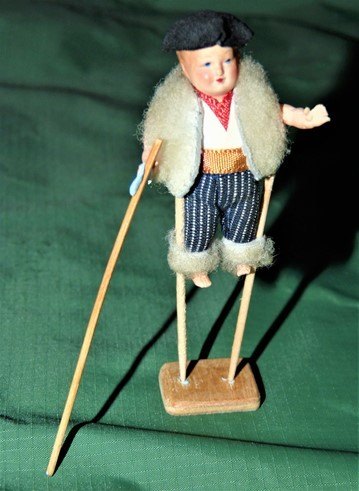 Day 4: This shepherd, with his sheepskin coat, comes from the area of France at the foot of the Pyrenees.  Much of the area is quite flat, and the sheep used to roam over a wide area.  To be able to see all their sheep the shepherds worked using stilts, which enabled them to get a better view. 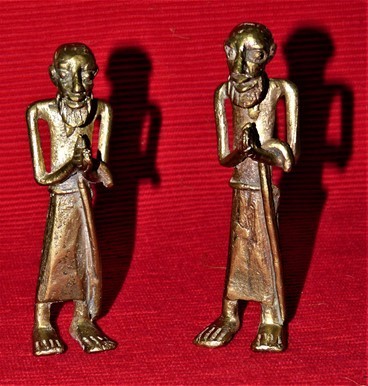 Day 5: These shepherds, each with a short crook over his arm like a walking stick, come from the West African country of Cameroon 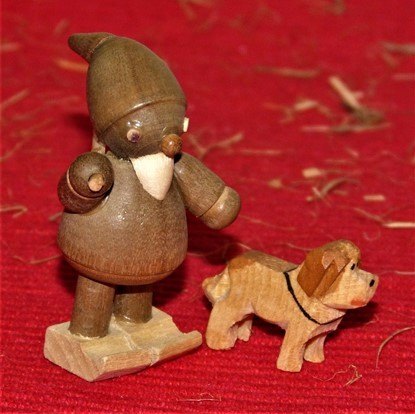 Day 6: St Luke tells us that when the shepherds left the stable, they gave thanks to God, and doubtless made a great noise telling everyone they met what had happened.  Although the Bible does not say so, it is likely that as a result other people living in the area would have gone to see for themselves – everyone is interested to see a new baby.

So would people from other parts of the world if it had been possible at the time.  This man, with his St. Bernard dog, comes from Switzerland 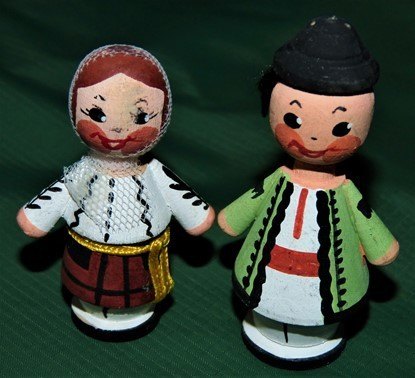 Day 7: It’s not certain where this husband and wife come from, but their clothes suggest one of the Greek islands.  We know there were many Greeks living or visiting the Holy Land at the time of Jesus. 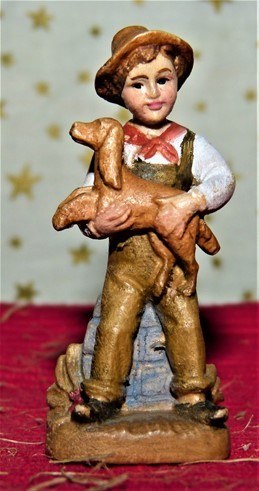 Day 8: Today people like to give a gift to a new baby.

This boy, probably from the South Tyrol area of Northern Italy, has brought his dog as a gift. 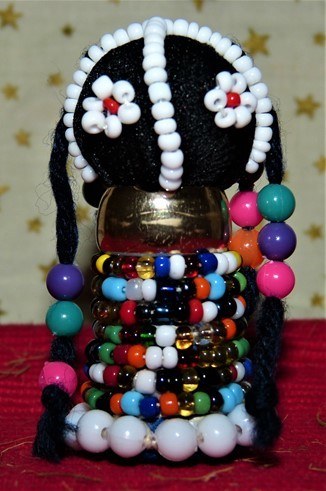 Day 9: In the mid-to-late 1990s St Francis Church supported the church and primary school in the township of Khayelitsha in Cape Town, South Africa.  We collected 2 pallet loads of children’s books to send out as well as regularly sending financial support and selling things made by the unemployed workers  there who had no other source of income.

This girl was made in the church workshop and represents the poorest of the poor, who Jesus would have known well. 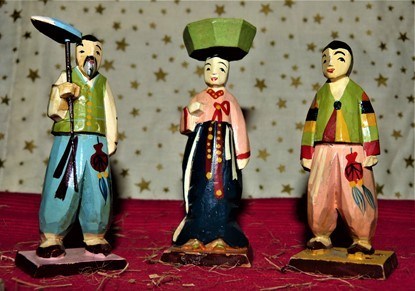 Day 10: These people come from Korea and are wearing typical peasant costume.

We do not know what is in the basket on the lady’s head – food for the journey perhaps, possibly a gift for the baby, or maybe both.  Her husband has brought his hoe.  Maybe the only tool he owns, he will have to make another when he gets home to be able to grow something to eat. 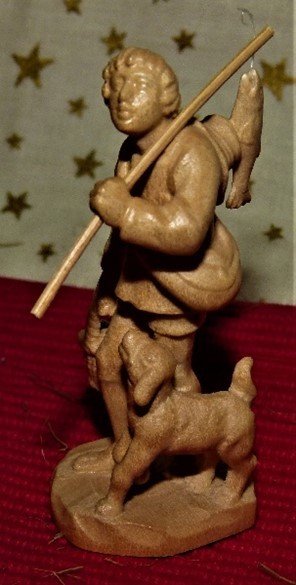 Day 11:  A fisherman with his dog.  A fish is not really a suitable gift for a new baby, but Mary and Joseph would have been glad to make use of it.  Jesus grew up to know many fishermen.  This one comes from the Alps. 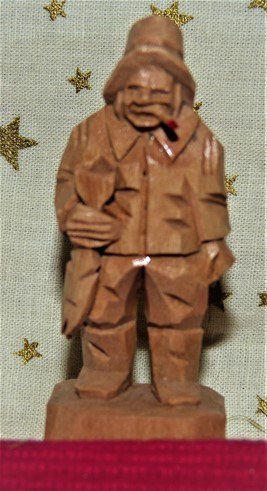 Day 12: Another fisherman with a fish as a present.

This is a trawlerman from Nova Scotia, Canada.  When Jesus was born no-one (except God) knew North America existed. 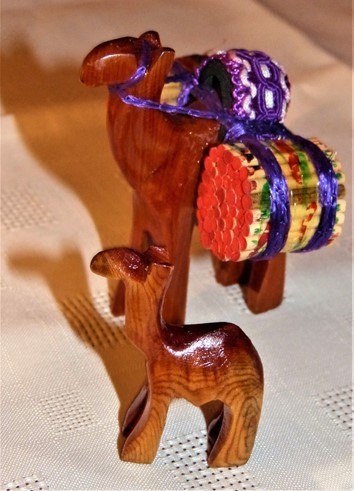 Day 13: Mary and Joseph would have met many other travellers during their journey to Bethlehem.  Everyone in the Roman Empire had to register at the town that their ancestors came from, and the Holy Land was no exception.  Joseph was descended from King David, whose hometown was Bethlehem.

This heavy-laden camel and her calf have travelled all the way from Agadir on the Atlantic coast of Morocco. 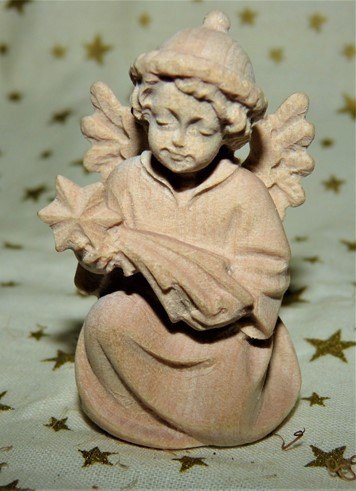 Day 14: Nobody knows when the Magi (sometimes called the Wise Men or Kings) set out from their homeland.  Did they leave before Jesus was born, to get there soon after the birth, or did the sign of a special star they saw in the sky first occur on the day of the birth?  In his Gospel St Matthew implies that  King Herod was unsure, and so ordered all the boys born between the Magi departure and arrival dates to be killed.

We do know that God put a star in the sky which went ahead of them as a guide. 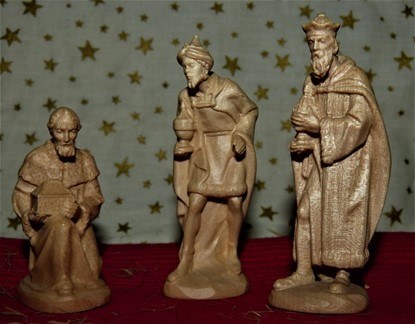 Day 15:  Traditionally there were 3 Kings.  Tradition even tells us their names: Caspar, Melchior, and Balthazar.  These are certainly names known to be in use in the ancient kingdom of Persia at that time.  There may have been more, or fewer.  They would certainly have had servants with them, they would not have travelled alone, especially given the valuable gifts they carried.

St Matthew tells us that they brought gifts of gold (for a king), incense (indicating God) and myrrh (used at burial to help preserve the body). 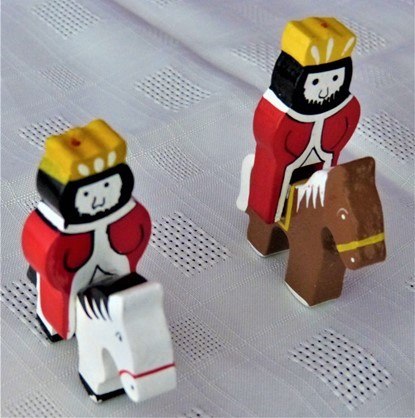 Day 16: We do not know how the Kings travelled.  Some may have been on horseback, like these two. 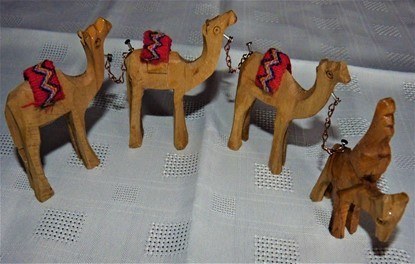 Day 17: Perhaps the kings, or some of them, came in a camel train.  Traditionally one king is said to have been black, suggesting he might have come from the land of Nubia, which we know as the Sudan.  That would have meant a journey by camel across the eastern end of the Sahara Desert, through Egypt, and up into the Holy Land. 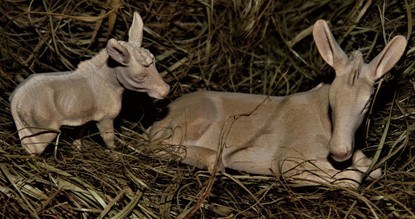 Day 18: When Mary and Joseph eventually reached Bethlehem, we are told they had to go round trying to find somewhere to stay – no booking ahead in those days.  Everywhere was full up, with all the people coming to register.  Eventually a kind innkeeper told them they could stay in the stable behind his inn.  It probably had lots of animal smells, but there was lots of hay for the donkey and straw to bed down on.  With all the animals belonging to those staying at the inn it would have been warm, too.  This donkey and her colt have made themselves comfortable. 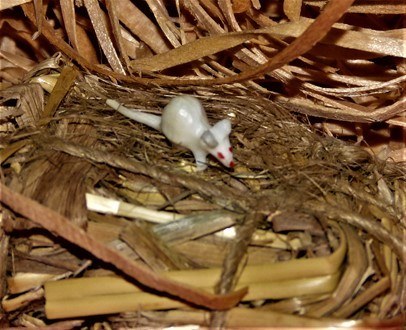 Day 19: Even today, stables have mice, living off seeds in the hay and straw, uneaten animal feed, and any food people have dropped

Day 20: Every inn would have provided food and fresh eggs were always needed.  As well as chickens there would have been a cockerel who would wake everyone up in the morning.  This splendid fellow is the Barcelos Rooster.  Commonly called the Portuguese Rooster, it is the unofficial emblem of that country.  It is said to represent a Love of Life – a good emblem for a new birth 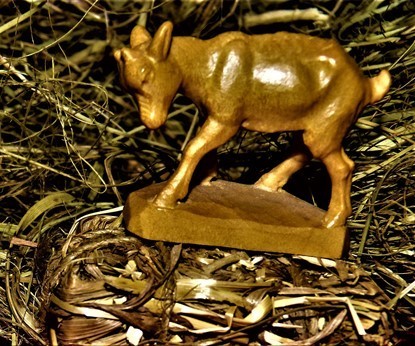 Day 21: A goat was probably kept at the inn to provide milk.  The shepherds looked after both sheep and goats.

This one comes from Switzerland 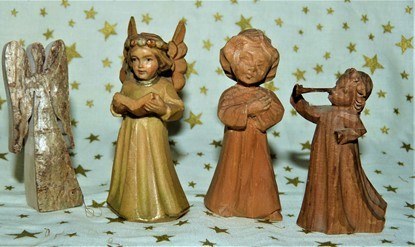 Day 22: When Jesus was born angels appeared everywhere.  Imagine being a shepherd in a field outside the town.  Suddenly, from nowhere, in the middle of a very dark night, people appear.  They know who you are, what your names are, and have an important message, just for you, from God.

Day 23:  Once the angels had delivered their message they were joined by others, all singing.  They were incredibly happy because at last Jesus had been born.  They had been looking forward to it for absolutely ages, ever since the old prophets started forecasting it.

This group is Austrian 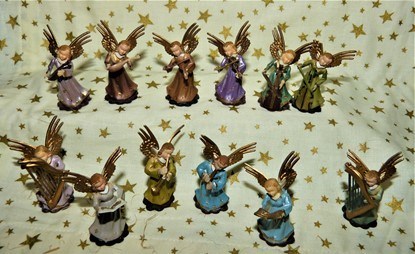 Day 24: This angel orchestra was made in Italy 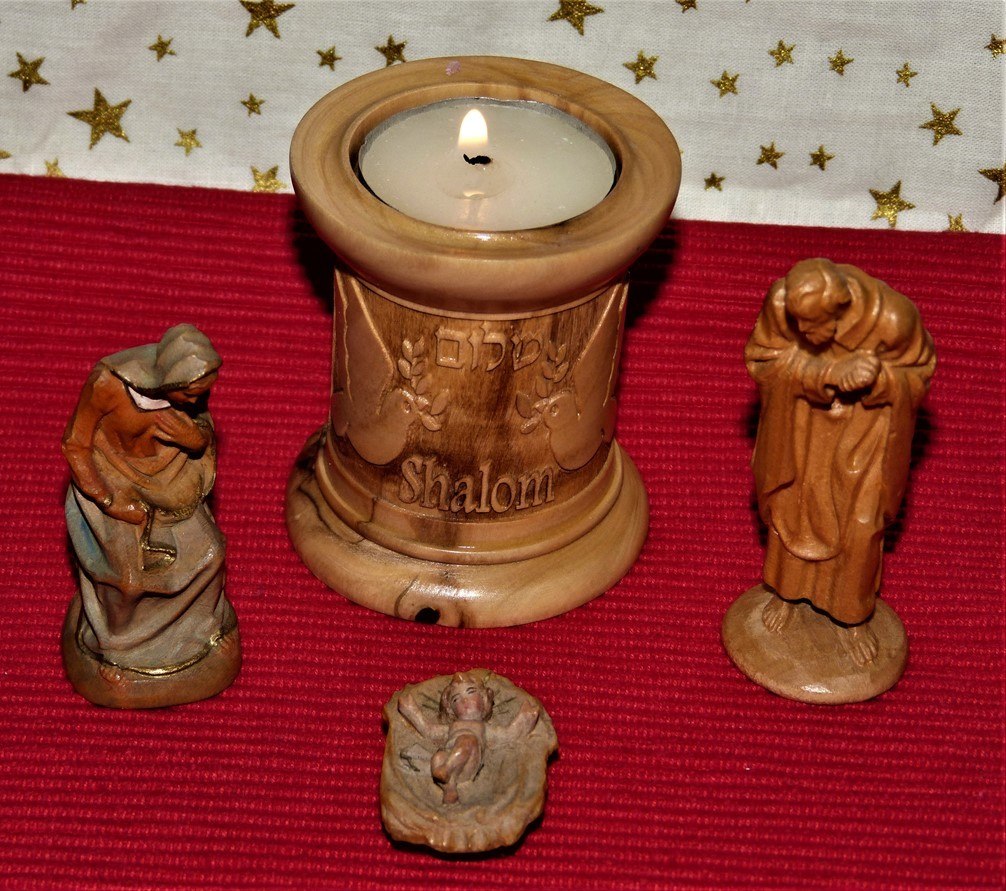 ‘Shalom’ is a Hebrew word meaning ‘Peace’.  It can be used as a greeting, a farewell.

Both names are represented by the lighted candle in its candlestick, which carries the word ‘Shalom’ and doves of peace.  It comes from The Holy Land.  The figures of the Holy Family were made in a village in the Austrian Tyrol.

Today it is His birthday, and we wish everyone a Very Happy Christmas