The choir of St Francis of Assisi was established in 1935 when the present Church was built.

There are around 30 trebles (boys and girls) and 14 men in the choir. Most of the juniors are drawn from Applecroft School in Welwyn Garden City, St Mary's School in Welwyn and children from the congregation families. Voice trials take place each November when the few places available are hotly contested! A great deal of commitment and dedication is expected of the trebles who, in return, gain a free musical education, develop a strong sense of responsibility, and experience a marvellous introduction to the treasury of church music. The men of the choir are all local and give their time to the Church freely.

The choir sings at many other churches and cathedrals over and above the commitment it has to St Francis Church. In recent years visits have been made to Norwich, St Albans, Ripon, Peterborough, Portsmouth, St Asaph, Sheffield, Exeter and Winchester Cathedrals. We also sang an evensong in Romsey Abbey and Aldeburgh parish church.

Over the next two Summers, the choir will sing in Salisbury and Guildford Cathedrals.

The St Francis Youth Choir is not currently running but we hope to have it back up and running soon. It is a recent musical development at St Francis Church, and was formed when we identified a need for a choir for young people who cannot commit to the demands of the main choir. It is also perfect for the girls of the main choir who retire at 15 years old; they can then transfer to this choir, where there is less regular commitment, continue their singing at St Francis, and have more time to focus on forthcoming school exams.

Rehearsals are not held on a fixed day, but a list of rehearsal times are issued per term to singers. The choir performs at least twice a term at the 9.15am service, usually during the administration of communion. The Youth Choir also raise money for charity around Christmas time singing in the Howard Centre and various homes for retired people.

Boys or girls can join this choir; the only initial requirement is that singers must be aged between 13 and 18. There are currently a number of vacancies, so if you know someone who might be interested, please get in touch with Richard Harrison.

A recording session in 1991

The choir prides itself on the depth and variety of the social and spiritual environment that it fosters. It also has an excellent reputation for developing the talents and personal skills of young people within a supportive community.

It is widely acknowledged that a sound musical education significantly improves a child’s IQ. Studies show that music greatly improves a child’s capacity to learn. The commitment and involvement needed contribute to the development of important skills that are of benefit in both personal and professional life. Many choristers from St Francis’ have put these skills to good use and gone on to become professional musicians, barristers, teachers and successes in many other walks of life.

Between 1964 and 2010 the treble line-up was exclusively boys. In 2005 a choir for girls was formed, and in 2010 this choir was amalgamated into the main choir. So for the first time in nearly 50 years, boys and girls sing together in St Francis Church!

Since 1935, there have been a number of organists and choir trainers. Here is the list, but there are gaps. Please let us know if you have the answers!

The trebles, siblings and parents at RollerCity November 2018 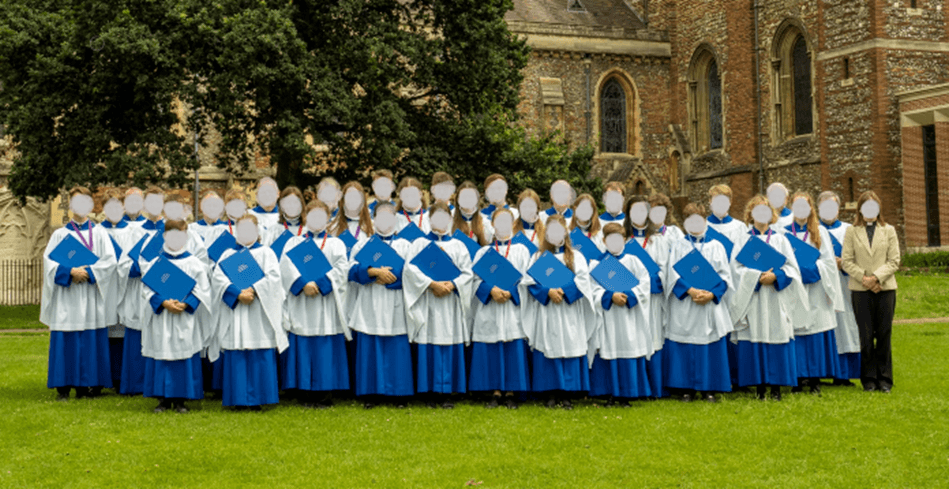 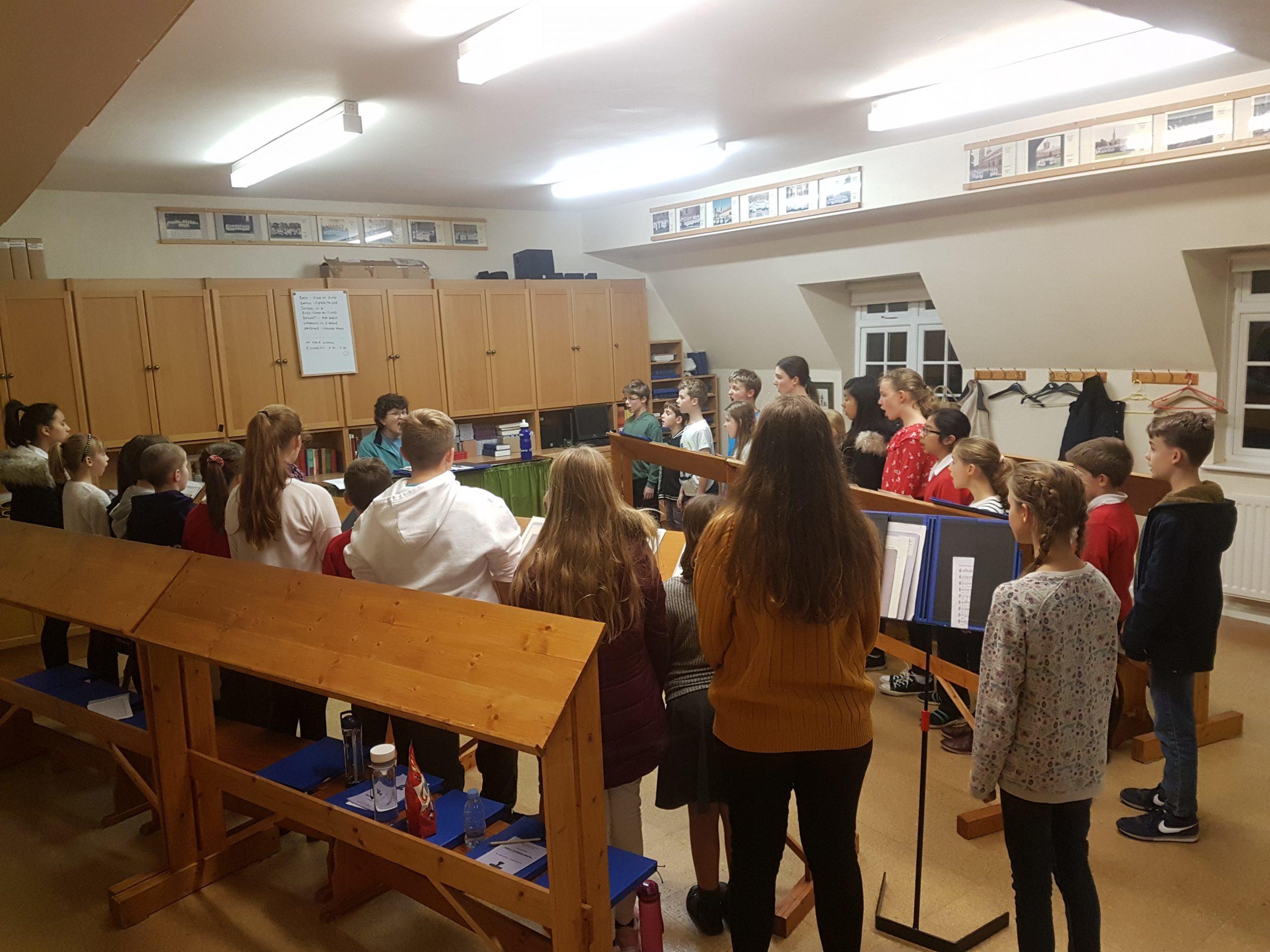 Trebles rehearsing in the Song School at St Francis 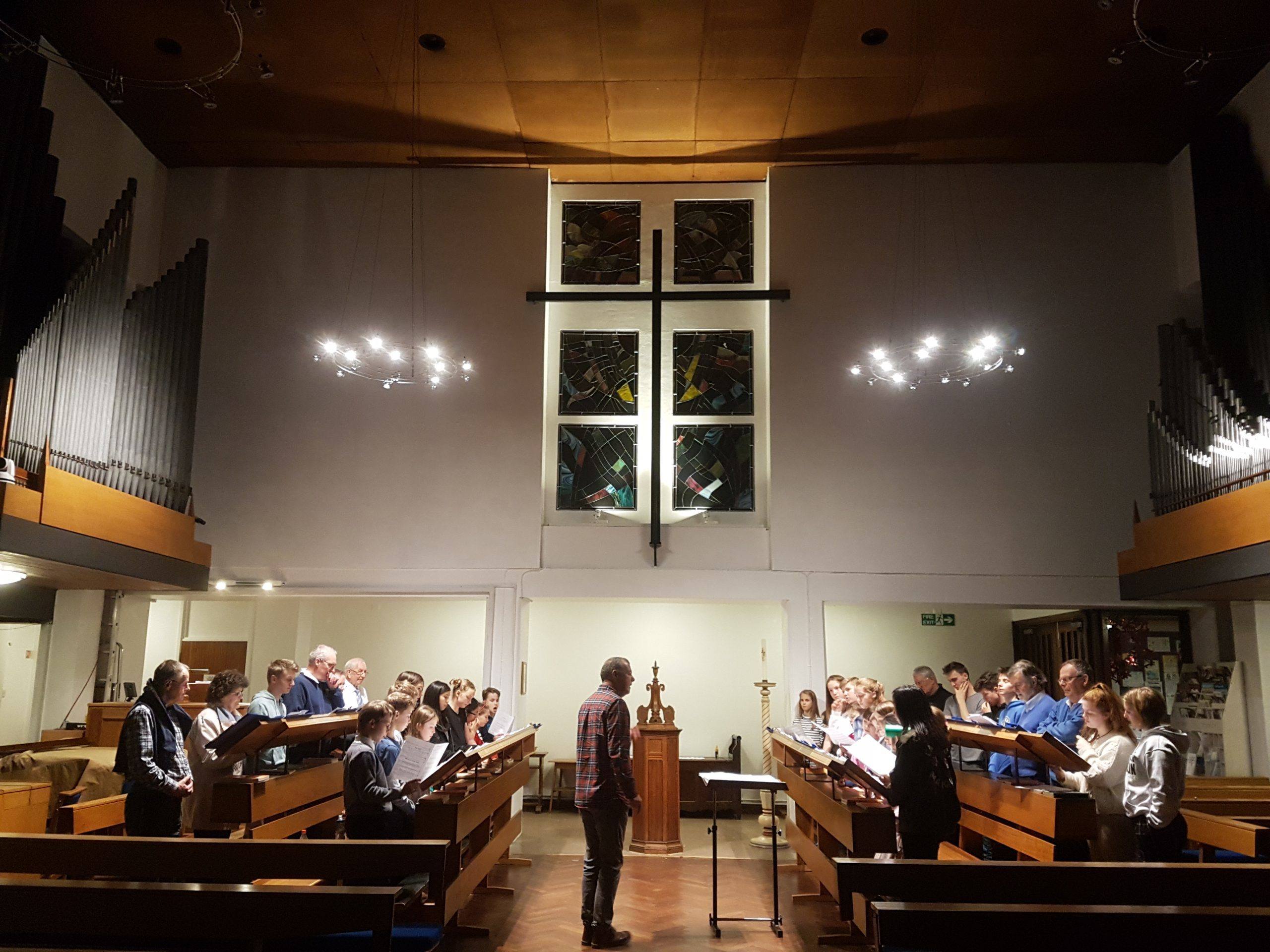 Click HERE to listen to the Nunc Dimittis from Byrd's plainsong and faux burden service recorded during our 2021 Choir Week in St Albans Abbey.

Click HERE to listen to Requests by Anthony Caesar recorded on Choir Week in 2019 in Portsmouth Cathedral.

Click HERE to listen to the Sumsion in G Magnificat recorded during our 2018 Choir Week in Portsmouth Cathedral.